Famously known as the abode of gods and goddesses, Himachal Pradesh is home to these eight shakti peethas that have been a source of divine power for centuries. These beautiful temples situated high on hilltops are famous for various reasons. Most of these temples are one of the 51 Shakti Peethas located in the hills.

Here is a list of eight famous Shakti Peethas in Himachal Pradesh that are visited and worshipped by millions of visitors every day.

One of the most famous 51 Shakti Peethas, Jwala Ji temple is a shrine of eternal flame even emperors and time couldn’t extinguish. The goddess Jwalamukhi with flaming mouth, also known as flaming goddess, is worshiped in the shrine. According to Indian mythology tongue of Maa Sati fell here. Apart from that, the idols of goddess Siddhida Ambika and Lord Shiva sit here.

The Chamunda Devi temple is located in Kangra district of Himachal Pradesh. It is believed that the battle described in the Devi Mahatmya took place. According to the legends, Kali killed the two generals of Shumbha and Nishumba called Chand and Mund. This is where Kali received the name Chamunda. To commend the godless Kali’s great achievement, Ambika declared that she would now be worshipped as Chamunda.

Once one of the most famous pilgrimages in North India. It is a Durga Shaki Peetha and one of the oldest temples in India. The temple was reconstructed back in 1916 following a devastating earthquake in 105.

The temple is dedicated to goddess Vajreshwari Devi. The goddess Sati Parvati is worshipped in the form of Pindi. According to legend, the goddess got injured while fighting and finally killing the demon Mahishasur. The wounds of the goddess were cured by applying butter. Since then, the tradition is alive and realized on Makar Sakranti every year.

People believe the goddess likes cool and peaceful environment, this is why the temple is situated amidst watery surroundings. The goddess is known for warding off heat from her devotee’s body. Diseases like smallpox and chickenpox are believed to be the manifestation of the Goddess in human’s body.

The temple of Shri Naina Devi Mata is situated on a hilltop in Bilaspur district of Himachal Pradesh. The temple premises, which are well connected through a ropeway offer an extended view of the Gobind Sagar Lake – a man-made lake on Sutlej River. The ropeway that connects the temple to the foothills takes pilgrims across a 10-minute-long flight of about 1 km to the top.

The ancient temple with beautiful architecture and mind-blowing settings, Bhimakali temple is center of attraction of Sarahan. The place also offers enchanting views of Shrikhand Mahadev. The temple is home to Maa Bhimakali, deity of the rulers of former Bushahr State. Sarahan is the place where Lord Shiva disguised himself as Kirat, according to the legends.

The temple complex comprises of two ancient style towers. The top floor of the ancient tower is the place where the silver-encrusted goddess resides. Photography is strictly prohibited and pilgrims cannot carry cellphones and cameras inside the temple.

Located at a distance of about 100 km from Shimla, Hatkoti temple is known for its architectural beauty and great religious significance. The temple which dates back to the Gupta period is believed to be built by Guru Adi Shankaracharya.

The Hatkoti shrine is a group of temples located on the banks of Pabbar River. The goddess Durga sits in the main complex of the temple, and the other one’s house deities like Shiva, Ganesha, and Parvati. The Shikhara-styled temple with sky-piercing tops attract tourists and pilgrims alike. 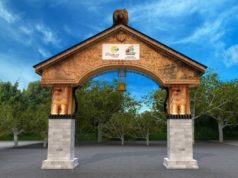