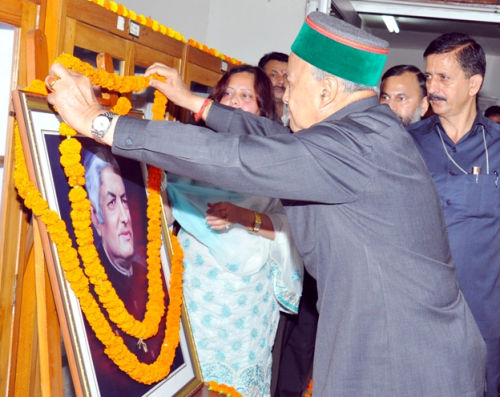 Virbhadra Singh said that late Dr. Y.S. Parmar was a visionary, farsighted and dynamic leader who dedicated his entire life for making Himachal Pradesh, a most progressive and developed State. He said that Dr. Parmar was the symbol of culture, civilisation and decency of the State. He said that Dr. Parmar was multifaceted personality who struggled all his life for the rights of people and present status had been achieved by following the path shown by him. He said that the people of State would remain indebted to him for generations to come for the hard efforts he made to get the State, identity as a separate political unit.

Chief Minister said that the first Five Year Plan of the State was of only Rs. six crore, but due to efforts of visionary leadership it was subsequently enhanced. He said that Himachal had achieved milestones of development in comparison to other big States of the country. He stressed the need that the glorious past and contribution made by the leaders of the State should be preserved so that it could become source of inspiration for the young generation.

Vidhan Sabha Speaker Brij Behari Lal Butail said that due to farsightedness of Dr. Parmar Himachal Pradesh had emerged as biggest developing State of the country and achieved milestones of development. He said that Dr. Parmar gave a distinct identity to the folk and local traditions of the State.

On the occasion Vidhan Sabha Speaker Brij Behari Lal Butail presented a cheque of Rs. 2.51 lakh to Chief Minister Virbhadra Singh towards Chief Minister’s Relief Fund on behalf of people of Palampur Assembly Constituency and another draft of Rs. 1.17 lakh on behalf of officers and official of Himachal Pradesh Vidhan Sabha. MLA from Banjar Assembly Constituency Karan Singh presented a cheque of Rs. One lakh to Chief Minister towards Chief Minister’s Relief Fund for providing relief to people of disaster affected areas of district Kinnaur.