Addressing a mammoth gathering at Paddal ground, Chief Minister said that Mandi Shivratri was one of the biggest festivals being celebrated in Himachal Pradesh. He said that this festival had been organised since thousands of years in the Mandi which is also knows as ‘Chhoti Kashi’. He said that Mandi Shivratri was a confluence of Vaishnav and Shaiv tradition and more than 200 deities along with their kardars participate in this festival. He said that many festivals and fairs were being organised in the state which were very helpful in the conservation of our rich culture and traditions.

Virbhadra Singh said that International Mandi Shivratri Festival had a distinguished identity in the country and State Government had provided international level status to certain fairs and festivals for promoting them at national and international level and Mandi Shivratri Festival was among them. He said that this year cultural programmes were being organised at Paddal ground for first time as large number of people can enjoy the programmes at this venue.

He said that Congress Party believed in equal and all-round development of the State without discrimination and policies and programmes would be implemented for the welfare of common man. Besides giving pace to construction of roads, hydro-electric projects and irrigation and public health schemes. He said that state government had adopted the manifesto of the Congress Party as official policy document and promises made in the manifesto would be implemented in phased manner. He said that free traveling facility to all the students of the schools would be provided from 1st April in Himachal Road Transport Corporation buses. 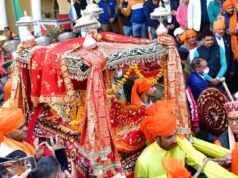