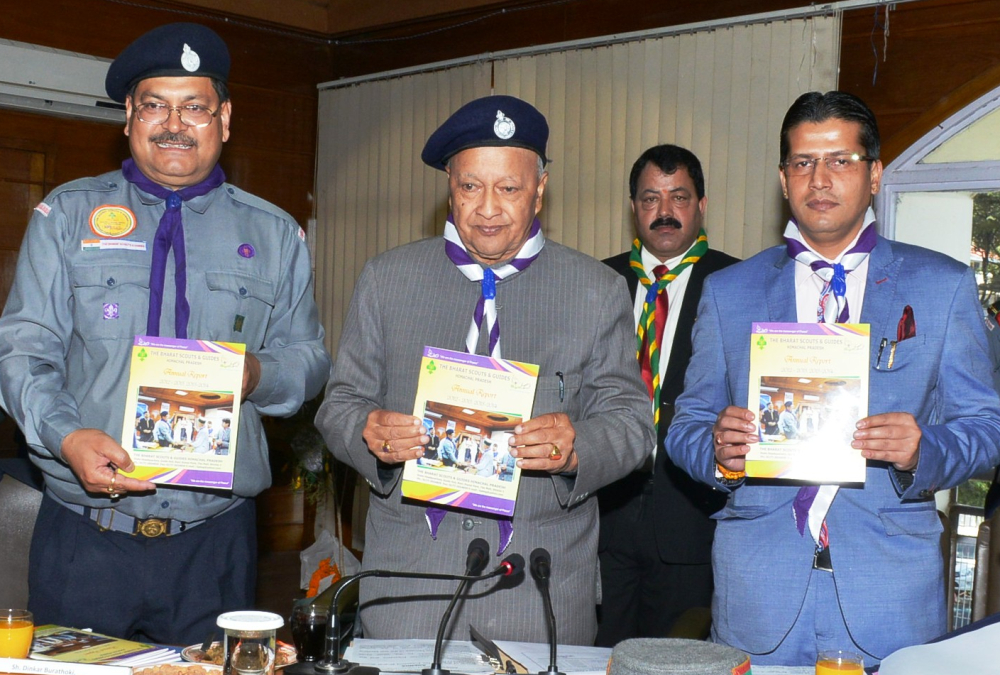 Chief Minister, who is the State President of Bharat Scouts and Guides, announced a sum of rupees one crore for the construction of Training Centre of BS&G at Riwalsar in Mandi district which would cost Rs. 5.5 crore. He said that the additional funds required would be borne by the State Government.

He said that the employees who were working on year to year contract basis at Headquarters would be permanently absorbed in the BS&G after completing eight years of service. The arrears would be released in the favour of the State headquarter employees from 8th July 2013 onwards. He also agreed to the concessional vouchers for scouts and guides within the State for camps and courses in HRTC Buses.

Virbhadra Singh said that more and more children should be associated with the BS&G movement for which it would be made compulsory for the students in school to join the movement. The education department will shortly come up with a notification in this regard, he said.

He said that Bharat Scout Movement which started in the year 1907 was working to fulfill the dream of Lord Baden Powell and had emerged as one of the independent, non-profit and non-partisan organization. He announced free transport facility to girls going to Delhi for receiving the President Award.

The Chief Minister stressed upon revising the courses of Mathematics, English and Hindi right from first class and to make them more effective and wide-ranging. He asked for starting Punjabi and Urdu in the schools where more than 30-40 students were interested to take up these subjects.

Approval was accorded in the meeting to enhance the Uniform (dress) rates of Cubs/Bulbuls from existing Rs 300 to Rs. 450/, of Scouts/Guides from existing Rs 450 to Rs 675, of Rovers-Rangers (Schools) from Rs 500 to Rs 750, of Rovers/Rangers (Colleges) from Rs 600 to Rs 900 and of Adult leaders from Rs 700 to Rs 900. The house also agreed for increasing the Daily Allowance of the volunteers during camps, tours and courses.

The Chief Minster wished BS&G all success for the Cubs/Bulbuls Utsav being organized at Ghumarwin in district Bilaspur in the month of November.

The house approved the annual accounts and balance sheets for the year 2012 to 2014 and annual estimated budget for the year 2014-15 and 2015-16 as recommended by State Executive committee.

Dinkar Burathoki, State Chief Commissioner, Bharat Scouts and Guides & Advisor Higher Education welcomed the Chief Minister and discussed various issues of BS&G. He also informed that the BS&Gs will be celebrating its founder day on 7th November at Rajbhawan in Shimla.