Chief Minister also urged the medical professionals to re-dedicate themselves for the service of humanity. He said that people had great faith in doctors and need of the hour was to maintain it which was only possible by serving the people with great devotion.

Prof. Dhumal said that the success of any government depends upon the delivery of services and implementation of the programmes by the field agencies, and no policy and programme could achieve its objective unless it had a public support. He said that medical fraternity had been instrumental in making Himachal Pradesh a role model in health sector in the country and in achieving good health indicators for the State.

Chief Minister said that the State Government had always been considerate towards the genuine demands of the medical fraternity who had been provided financial and promotional benefits in abundance during past four years. He said that in return the government would be expecting dedicated services to the common man by them so that Himachal Pradesh could retain its title of best State in health sector in the country in future as well. He said that the State Government had ensured quality health infrastructure and best of the machinery and equipments had been made available for diagnosis and treatment of the patients.

Health Minister Dr. Rajiv Bindal said that recruitment of 500 doctors had been made through Public Service Commission during past four years besides hundreds of posts of para-medics had been filled in. He said that State had been conferred upon with an Award by World Health Organisation for its smoke free status State in the country. He said that sale and consumption of tobacco products within the radius of 100 meters of educational institutions had been banned and tax on tobacco had been increased to desist people from its use.

Dr. D.S.Chandel, Director of Health Services, welcomed the Chief Minister and thanked him for all the benefits provided to medical professionals during pasts four years. Dr. Susheel Chander, President of the Association, proposed vote of thanks and assured Chief Minister of rising upto the expectations and aspirations of the State Government by delivering efficient and professional services to the people. Dr. Jiva Nand Chauhan, General Secretary of the Association detailed the benefits given to the medical officers and thanked the Chief Minister for launching a number of ambitious schemes to strengthen the medical services network in the State. Ali Raza Rizvi, Secretary Health, Capt. J.M. Pathania, Special Secretary Health, other senior medical fraternity and prominent people of the town were present on the occasion. 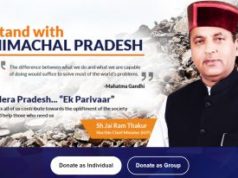 CM announces to constitutes High level Committee for setting up of...