The Lok Sabha (House of the People) is the lower house of India’s bicameral Parliament, with the upper house being the Rajya Sabha. Members of the Lok Sabha are elected by adult universal suffrage and a first-past-the-post system to represent their respective constituencies, and they hold their seats for five years or until the body is dissolved by the President on the advice of the council of ministers. The house meets in the Lok Sabha Chambers of the Sansad Bhavan in New Delhi.

The maximum strength of the House allotted by the Constitution of India is 552. Currently the house has 545 seats which is made up by election of up to 543 elected members and at a maximum, 2 nominated members of the Anglo-Indian Community by the President of India.

An exercise to redraw Lok Sabha constituencies’ boundaries is carried out by the Boundary Delimitation Commission of India every decade based on the Indian census, last of which was conducted in 2011. 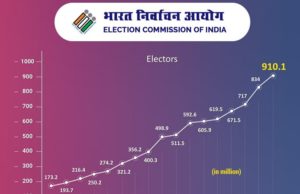 Rahul Bhandari - July 21, 2019
0
E-postal ballot recorded 60.14% turnout in 2019 Among the many milestones recorded by Election Commission of India during the recently concluded Lok Sabha Election 2019,...

Rahul Bhandari - May 24, 2019
0
Shimla: In Lok Sabha Election 2019, the BJP has registred thumping victory in all four parliamentary segment in Himachal Pradesh. In 17th Lok Sabha,... Rahul Bhandari - May 19, 2019
0
Shimla: Three polling staff have died while performing their poll duties in Himachal Pradesh today. The deceased Polling staff include Vineet Kumar of Sapri in...